Yea you had created a basic BubbleBurst with cocos2dx template in visual studio 2010. The new project now has a list of files of type .cpp, .h, .png, .ico. So now we see what each file do for your first project.

To understand these files first of all you have to understand the Architecture of cocos2dx.
Basic concepts :-
1> Layers :
There can be one or more layer in a scene. Each layer may contain images, animations, labels, buttons, Sprites etc
In our project in file HelloWorldScene.h: A layer is created
class HelloWorld : public cocos2d::CCLayer

And "X" button and label "HelloWorld" are all added to this layer.
Layers are subclass of CocosNode, they can be transformed manually or by using actions.


2.> Scene
A “scene” in Cocos2d is just a special sort of node that acts as the ultimate parent for all other nodes that are visible.  Still cant get it?
To say it simply Only one scene can be running at a time. All the inputs, audio, images are all drawn on the scene which is visible. Inside this one scene there can be many layers.


3.> Director :
The Director takes care of various scenes.  Director is a shared (singleton) object. It knows which scene is currently active, and it handles a stack of scenes to allow things like "scene calls" (pausing a Scene and putting it on hold while other enters, and then returning to the original). The push, pop, replacement or end of the current scene is made by director.
The Director is also responsible of initializing the main window.
In our project in file AppDelegate.cpp: A Director is used
CCDirector *pDirector = CCDirector::sharedDirector();

and using this director to start the first and only scene in our project "HelloWorld" scene
pDirector->runWithScene(pScene);

4.> Sprite
A cocos2d' sprite is like any other computer sprite. It is a 2D image that can be moved, rotated, scaled, animated, etc.  Sprites (implemented using the Sprite class) can have other sprites as children. When a parent is transformed, all its children are transformed as well.
Since sprites are subclass of CocosNode, they can be transformed manually or by using actions. See Actions, Transformations and Effects for more detail about actions.

5.>Event
There is a event generator like keyboard press, Button press, mouse click, scene loaded.
These event are catch by a event listener. This is implemented using function pointer.
In our project in file HelloWorldScene.cpp
Event generator:
CCMenuItemImage *pCloseItem = CCMenuItemImage::create(
"CloseNormal.png",
"CloseSelected.png",
this,
menu_selector(HelloWorld::menuCloseCallback));

Still cant get a clue... Here is a simple picture
{
There is only one Director
There can be one or more scenes but only one scene runs at a time
All the scenes are controlled by the director.
There can be one or more layers. And we can draw many layers at the same time.
All layers are linked to the scene.
Layers contains sprites, labels, buttons, menus etc,,
Events are used to pass message between various elements.
Actions, transitions, Effects etc are used over layer, sprites, nodes.
}


How all element are placed in our game 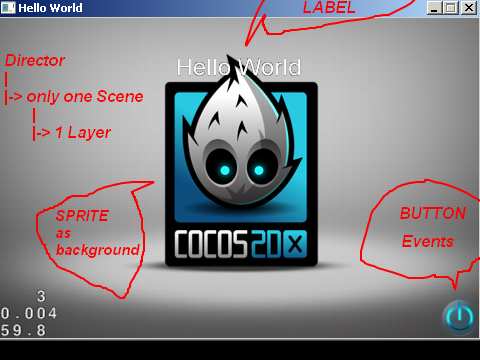